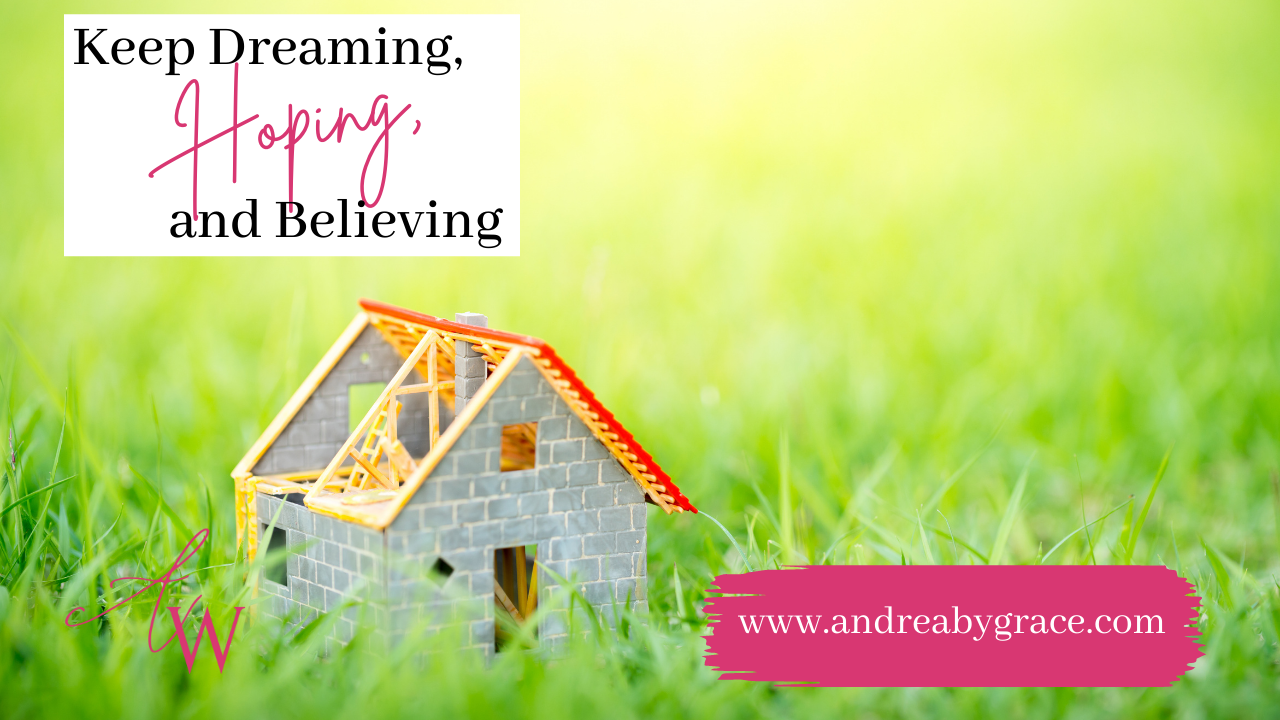 Paul’s statement above has become a motto for my life.  I am a visionary by nature meaning that I see what should or could be way before it is actually in existence.  When I was younger, I would work and work at a vision to try and pull it together.  A vision immediately became a goal.  As I grew in wisdom, I began to understand that not all visions are meant for the now.  I began to understand that I am to walk in faith and that if the Lord gives me a vision then it will come to pass in His perfect timing not mine.

When I founded I Will Stand International in 2012, the Lord gave me a vision for safe houses for women.  It was birthed from the murder of a friend’s daughter who was in a violent relationship.  Visions never remain small with me, and I began to see this network of safe houses that ran all the way up the East Coast (I wasn’t sure why it was the east and not the west at the time).  I referred to this vision as the Invisible Village or the Underground Railroad for Women.

I already had a heart for safe homes.  When I was processing through my own childhood abuse, I dreamed of a ranch for abused and neglected children.  A place where they could go to feel loved, protected, and nurtured.  A place where they grow in their identity in Christ and know that God loved them and had not forgotten them.

In the fall of 2012, I was on a Facebook page for domestic violence and a woman made a post.  It was actually a pretty vague post but the Holy Spirit had highlighted it.  I reached out to her and before I knew it, I was coordinating a rescue effort.  She lived in New York, and we lived in Dallas.  She was trying to make her way up to Alaska via hitchhiking to escape.  I was horrified at the thought of a woman hitchhiking across the US so I told her we would go get her.  I had a friend living in DC at the time so the woman found a ride with a husband and wife trucking team at a local truck stop, and they took her to Philadelphia.  My friend and her roommate drove up to Philly and brought her to DC to stay in a hotel until Sean and I could make it up from Dallas to pick her up.

Her and I were chatting on the way back to Dallas, and she asked a question to which I responded, “I have no idea.  This is our first time doing something like this.”  She couldn’t believe that someone would just hop in their car and go across the country for a stranger.  I told her that she was brave for coming along with us when she didn’t know us.  She said that it was really her only option.  My heart broke for her.

She stayed with us for several weeks, and we ended up transitioning her to a women’s shelter that could provide more support for her.  I learned that we needed to be more equipped with knowledge, resources, and relationships with people that had a heart for this work.  Over the years, we had “leads” that I thought would come together for a safe home so that this dream would finally begin, but each time they would fall apart because the person wanting to lead a home was not where we needed them to be to execute the vision we had.  I didn’t just want another group home.  I wanted a family environment so the women did not feel that they were in a program but were a part of a loving, healthy family.

During all the years of waiting, I kept bumping into women that desperately needed a safe place to rebuild their life. It would have been so easy to give up on this dream or think that it would never come to pass.  It would have been easy to get disheartened and frustrated at all the people that I was unable to help.  I chose to surrender it to the Lord and let him work through the details.

In 2016, a friend from high school told his sister to reach out to me if she wanted to make a difference.  Lori and I started talking all throughout that year.  The Lord stirred similar interests in the both of us, and I asked Lori if she and her husband Weston wanted to head up IWSI in SE Texas.  Over the years, they have lead street ministry teams, pulled people off the streets and taken them to recovery programs, taught discipleship classes in some of these homes, brought people into their lives to love, disciple, and help them to re-establish their lives.  They are gifted at being able to challenge and push people in a loving and healthy way.  They make people feel welcomed, wanted, loved, and a part of something bigger than themselves.  I have truly been blessed to have such amazing leaders on my team.

The Lord lead Weston and Lori to Maine in March and blessed them with a good chunk of land.  He quickly connected them to people in the community.  Lori bumped into a group of people wanting deliverance so she asked if I would come up.

Sean and I just returned from an amazing time in Maine.  I asked Weston and Lori to share the vision that they had for Maine.  We discussed placing tiny homes on their land so that women had a training ground to come and grow in the freedom of the Lord and become grounded in their identity in Christ.  We discussed a place where they could come and learn to walk like Jesus and serve as we are called to serve.

Friday, after only being home for two days, Lori called and said that a woman she knows from SE Texas desperately needs to get out of a very bad situation, and she was willing to go to Maine to escape and rebuild.  After the waiting is done, after the training is complete, after all the alignment happens, the Lord moves very, very quickly.  I am currently in the middle of coordinating the logistics of getting this young woman from Houston to Maine.  We do not have tiny homes set up yet, but Weston and Lori are making it work.

And so it begins…after 9 years of waiting and hoping and praying and trusting and choosing to believe that someday when the Lord knew that the timing was right that He would bring it all together, it is happening.  And interestingly, the coordination just so happens to stretch all the way the East Coast.  He never misses a detail.

"Hope deferred makes the heart sick, but a longing fulfilled is a tree of life."  Proverbs 13:12.  We must choose to keep hope stirring by trusting in the Lord's faithfulness.

If you would like to be a part of the mission work that we are doing through I Will Stand International, please reach out.  If you would like to financially support our work or sow specifically into the rescue effort of getting this young woman our of her dangerous situation, you can donate by clicking here.  I Will Stand International is a 501c3 nonprofit.

Thank you in advance for your prayers, support, love, and encouragement as we work to do our part to further advance the Kingdom of God.