Is the Fullness of Christ in You? 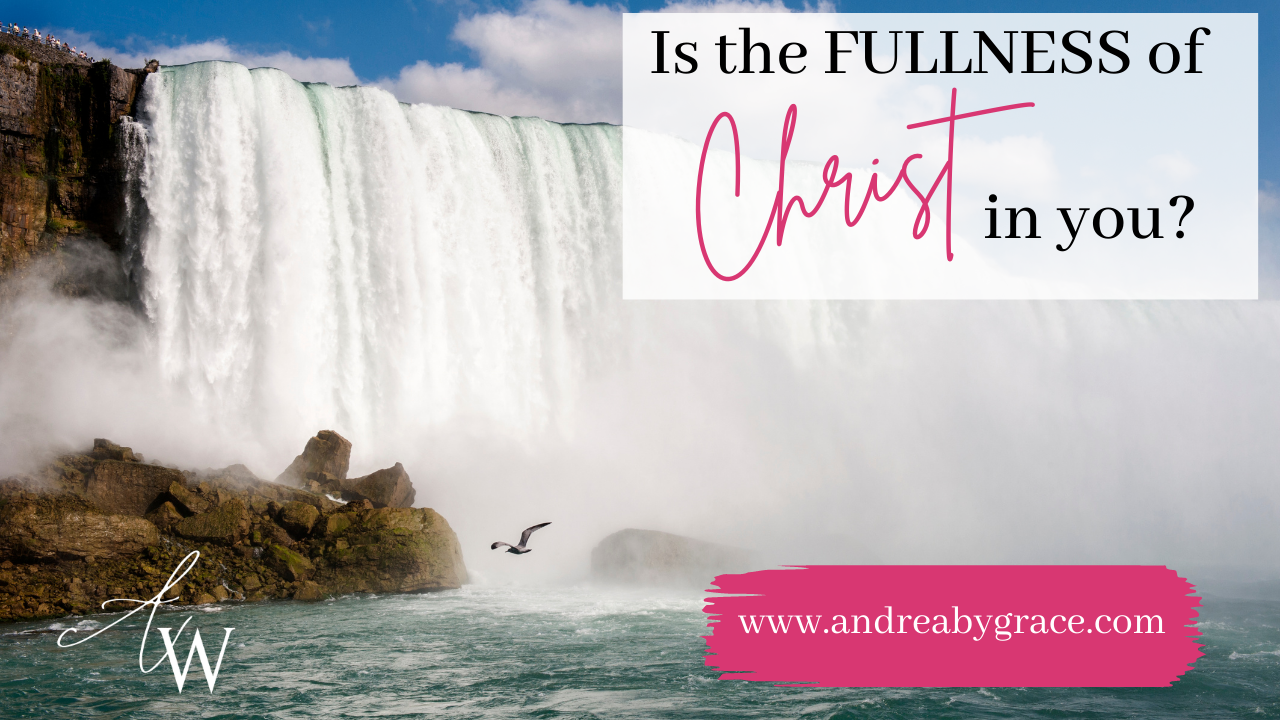 “You are my dear children, but I agonize in spiritual “labor pains” once again, until the Anointed One will be fully formed in your hearts!” Galatians 4:19 TPT

“My little children, for whom I am again in [the pains of] labor until Christ is [completely and permanently] formed within you—” Galatians 4:19 AMP

I came across the scripture above, and it nearly jumped off the pages at me.  I had never thought of Jesus NOT being fully, completely, or permanently formed in the heart of believers; however, it makes sense.  When we submit to the Lordship of Jesus through faith and receive salvation, how many of us fully submit every area of our life immediately, wholeheartedly, without hesitation, and never look back?  Very few, if any.  Many of us are partly in this new faith and the majority still in the world.  The fullness of the Lord in us is a process of releasing ground that the enemy has hold of in our life and fully submitting that area to the Lordship of Jesus.  I believe that this full submission results in the fullness of Christ within us.  Full surrender means full lordship.

In this chapter, Paul is pleading to the Galatians to be careful of false teachers who were working to divide the church from Paul’s teachings and leadership.  These teachers were working to mix law back in with the grace Jesus gave us.  The law’s purpose was to expose sin, our disobedience, and/or our inability to fulfill all the requirements of the law (Galatians 3:19).  The law is all or nothing.  Either it was followed in fullness (without sin) and one was righteous, or one could not uphold the entirety of the law and one was unrighteous which lead to judgement and eternal separation from God.  I am sure that you can guess which category every falls into.

Galatians 4:19 struck me because so many people think that faith in salvation is enough.  Or they mix a little “saved by grace through faith” with the law meaning that they believe that they are saved by grace through faith but that the rest of their Christian walk is about trying to be good or trying to be obedient and follow God’s commands.  Friends, this thinking is mixing grace and law and keeps believers in bondage.

Galatians 4:23 says “the law was the jailer, holding us as prisoners under lock and key until the “faith,” which was destined to be revealed, would set us free.”  When we go back to thinking that we must follow rules and regulations, we submit ourselves back to this law.  We are back in the spiritual court where we are held accountable for our mistakes and disobedience.

Now hear what I am saying, just because grace takes away the punishment for sin, we are not given a license to sin.  If we intentionally sin or knowingly and purposely walk in disobedience to God’s Word, are we really submitted to his Lordship?  Certainly not!  Grace gives us the covering to mess up, be corrected, and receive discipling without having to move into punishment by the tormentors (demons or evil spirits).

I have two teenage daughters.  We give them a lot of latitude with their social activities because we trust them and know that they have a desire to honor us, respect us, and do the right thing.  If we ask them to be home by a certain time and they are late, we extend grace because we know it was not intentional nor out of defiance.  However, if they did not respect, obey, or honor us, their freedom would be severely limited and instead of grace when they missed a deadline, they would receive punishment.  Our motivation would be disciplining in love with the hope that they would move to a place of obeying, respecting, and honoring us.

Thankfully, the Lord got a hold of my when my children were young.  I was raising them in a very rule based manner.  As the Lord began to teach me about His Grace, he began to teach me how to parent with grace.  My husband and I worked to cultivate a relationship with our children where love, honor, respect, trust, and grace were the center.  This resulted in children who are obedient out of love not compliance.  And when disobedience tries to sneak in, we have a long heart to heart conversation and address the root of the disobedience.

I learned early on that the law creates two different types of people.  My husband wanted to rebel because he saw that he could never live up to all the requirements in the Bible so why try.  I WORKED hard to try and fulfill everything that I could and be as obedient as I could.  I placed a measuring stick next to my life.  I was constantly measuring if I was good enough, serving enough, doing enough, etc.  This method caused a puffing up in pride if I thought I was doing enough or feelings of failure and rejection if I felt I did not measure up.  If I did not receive a position I wanted, failure.  If I received the position, pride surfaced in knowing that I had done enough to earn it/deserve it.  My worth and perceived value would rise and fall depending on my circumstances instead of being grounded in my identity in Christ.  I could not have articulated all of this at the time.  I would have said that we could not receive righteousness through works; however, my actions and interpretations of situations were showing a completely different core belief system that kept me in bondage.

Paul had already shared the message of grace with the Galatians; yet, again he was having to separate out the law from the grace that Jesus freely gave us.  I get to see a lot of what keeps people in bondage at the core, and it is their belief system.  Sadly, so many times, they think that they are right in line with the Word of God, but often it is a mix of law and grace in varying degrees or an outright choice to continue in what they think is “justified” disobedience without classifying it as disobedience.  Paul said that he will agonize in labor pains until the fullness of Jesus is fully formed in their hearts.  It is only the fullness of Jesus…embracing His entirety not only some of His truth…that moves us from being in bondage under the law into the freedom of His grace covering.

Where are you in your journey of receiving the fullness of Jesus?  Are you one foot in and one foot out?  Have you surrendered every area of your life to the Lordship of Jesus or only parts of your life?  Do your words, emotions, thoughts and actions reflect a belief system that is grounded in the Word of God?